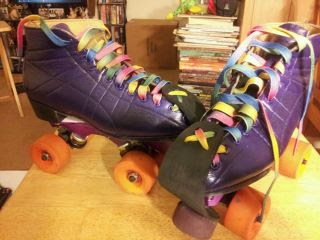 So I got my boots mounted to a size 2 Avenger Mg that I got for Christmas, painted them purple, and have been rolling along! Since we started an off-skates boot camp at our first practice of the new year I haven't had a lot of time on them, but it has been so nice when I've skated now.

Speaking of Boot Camp....I thought I had made lots of progress getting in shape. The first night of Boot Camp proved me wrong and I am determined to not let my self-doubt or anything else stop me. Right now being self conscious when I have to do any jumping or jogging is a big hurdle for me as I am both top heavy and rather slow. I don't want to feel like I'm holding people back. But being unable to jog five laps around a derby track is somewhat depressing. I wasn't the only one there who had issues with it, but I was the only derby girl who couldn't do it. Despite how far I've come since I started out that really made me feel like the weakest link on a good team. I play one position, I'm slow, my endurance is light years AWAY from many of my teammates, and I still struggle with some basic things.

However I have decided that I will survive boot camp and I will come out of it as a stronger woman and skater. In addition to the boot camp I am doing a Primer for the Roller Derby Workout Challenge that you can find on Facebook (the primer is on fleetly.com) and then I will be doing the RDWC for 2012. I am finally making a serious effort to not be defined by my pant size or by the numbers I see on the scale and instead am simply trying to be a better, stronger, healthier me. I'm hoping that by the time this is all said and done I will have made serious changes that lead to serious improvement both on and off the derby track.
At the same time though I refuse to be super hard on myself because every step I make in the right direction helps and every time I slip up...well...I am only human after all.

Dixie
Posted by dixiedoesderby at 12:08 PM No comments: